Note: Whether the target node is local or remote, it’s important to have the WinRM service up and running with the appropriate WinRM listeners.

The PUSH mode is easy to configure and use as it does not require any infrastructure services, such as a central shared location to host the configurations. However, the Push mode is not scalable. Pushing configuration to hundreds or thousands of systems would take quite long and can be limited, based on the resources available on the system on which the Start-DscConfiguration cmdlet is being run.
To enact configuration, we need all resource modules to be present on the target system. This represents another limitation of the Push mode. For example, if you have custom DSC resources used in a configuration script, the modules for these resources must be copied to target systems prior to pushing the configuration 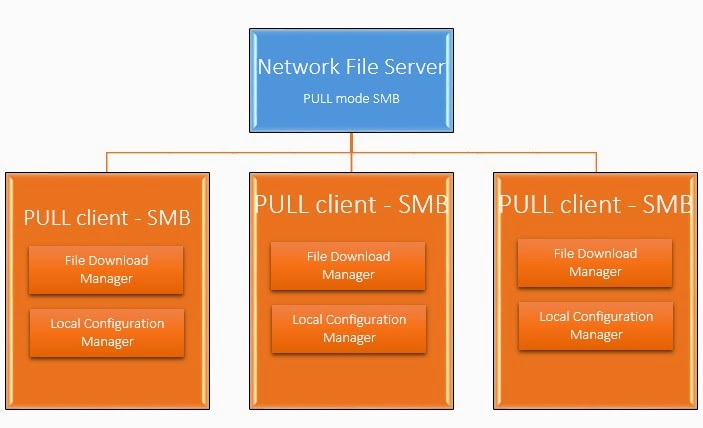 To configure an SMB based pull server, you can use the New-SmbShare cmdlet to create a file share that can store the configuration and custom modules.

Configuring the PULL client based on SMB

Later when creating PULL configurations for the clients to react, you can use the GUID mentioned in the ConfiguationID property for the target machine as the Node value.
Posted by Prajeesh Prathap No comments:

DSC is a feature built into the Windows Operating System. It’s based on the standards like CIMS and WS-Management remote management offered by the operating system. With DSC you can move to a way of configuration management where you can create a script that defines how the state of the server should be instead of defining how to make the server in the desired state. That means, DSC is more of a declarative syntax than an imperative one. This makes DSC scripts/ configurations easy to understand and maintain by the operations.
A sample DSC configuration for configuring the web applications in a SharePoint farm looks like:
Configuration SPSiteCollectionConfig {
param($nodes)

In our example we added the name of the configuration at the end of the script. This will ensure that the script when executed will generate the MOF files for each node and store it in the folder that has the same name as the configuration.

Posted by Prajeesh Prathap No comments:

PowerShell 4.0 introduces desired state configuration (DSC), a powerful new feature that makes it easier than ever to manage your Windows infrastructure, whether on premise or in the cloud. DSC is built on the Common Information Model (CIM) standard developed by the Desktop Management Task Force (DMTF) and uses Windows Remote Management (WinRM) technology as a communication mechanism. In this post we will look at what Windows Remote Management is and how it is used in the Windows OS world to enable standards-based management. In the upcoming posts I'll explain how CIM cmdlets in PowerShell use WinRM to work with management data from remote systems and the role of DSC in managing remote machines.
Windows Remote Management is the Microsoft implementation of the WS-Management Protocol. It uses SOAP (Simple Object Access Protocol) for exchanging control information and data between capable devices over HTTP and HTTPS. The main goal of WS-Management-based implementation is to provide a common way for these systems or components to access and exchange information.
The WinRM sevice enables remote management of windows systems. You can use the cmdlet given below to check the status of the service on the computer.
Get-Service -ComputerName 'MyComputerXXX' -Name WinRM
If the service is not enabled on the computer, you can create a listener based on HTTP or HTTPS protocol on the desired port. To setup a WinRM listener you can use the Set-WSManQuickConfig cmdlet. Once WinRM listener is set and working, you can use the infrastructure to access management information from remote servers. 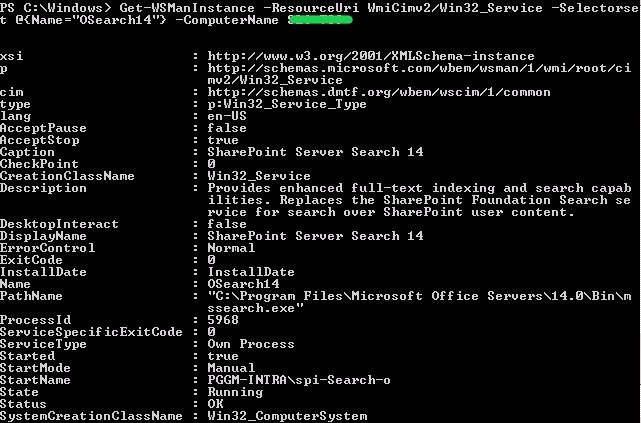 The CIM cmdlets introduced as part of PowerShell 3.0 makes it easier to work with Windows Management Instrumentation.  CIM - Common Information Model is the DMTF standard for describing the structure and behavior of managed resources such as storage, network, or software components. The CIM standard defines two parts:

The CIM cmdlets support multiple ways of exploring WMI. They work well when you are working in an interactive fashion. For example, Tab expansion expands the namespace when you use the CIM cmdlets; thereby permitting exploring namespaces that might not otherwise be very discoverable. You can even use this technique to drill down into namespaces. For e.g if you want to find all the classes in the root/Microsoft namespace. use the cmdlet. You can try out tab completion after typing in the –Namespace option for the cmdlet.
Get-CimClass -Namespace root/Microsoft
To create an instance of a class, you can use the Get-CimInstance cmdlet. For example, the below given command, exposes all properties for the class MSFT_WmiError
Get-CimClass -ClassName MSFT_WmiError | ForEach-Object {$_.CimClassProperties}
You can also use the –ComputerName or –CimSession parameters to manage remote machines. Its recommended to use the CimSession and reuse the session if you are trying to perform a large set of operations on the remote server.
For e.g. you can use the commands given below to get the details of the processes running on the remote server:
$session = New-CimSession –ComputerName XXX
Get-CimInstance –ClassName Win32_Process –CimSession $session


Once we have the CIM sessions set up and the command execution is complete, we can remove the existing CIM sessions, by using the Remove-CimSession cmdlet.
Posted by Prajeesh Prathap No comments: 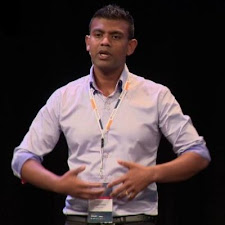